My Adventures in La-La Land (the Church of Scientology)
[ – continued – ]

Ron had been experiencing some troubles (legal) with Britain and the U.S., so he bought a couple of ships and started his own “navy”, the Sea Org. The Flagship of the Sea Org was in the Mediterranean most of the time.

Our family had gone as far as we could go in D.C., we all decided to move to the Flagship for further training. So in 1968 we sold the house in Maryland and flew to join the Flagship in Melilla, Spanish Morocco, on the north coast of Africa. 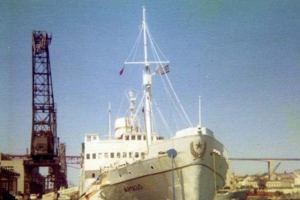 As we arrived, the ship was preparing to leave and we were separated from one another, assigned to different areas of the ship to help batten down the hatches and prepare for sailing. I ran into Diana Hubbard as well as her younger siblings Arthur and Suzette. Quentin, who was my age, was away on a mission. Having already corresponded with him for several years, I was anxious to meet him.

Around 1am, someone came along calling my name. It seems that something had gone wrong with our being processed on board and we were gathered up and deposited on the dock. Though all the paperwork had supposedly been approved before we left the states, it seems someone forgot to dot all the “I’s”.

After spending a couple of days in Melilla – where the heavily-armed Spanish troops marched through the streets at dawn – we flew back to Spain and stayed a week in Malaga before continuing north to England. If we could not go to the Flagship, Dad reasoned, we could go to Saint Hill and get the training there.

With all the arrangements being made, we boarded a plane and touched down at Heathrow to find there had been an unusual development while we were in the air. Britain had closed the country to Scientologists! We were told to get back on the first plane and leave.

But after several hours of talk between the customs officials and others, we were given week-long visas to visit with the clear understanding that we would not be staying longer to continue our Scientology studies.

We had a pleasant week in England before flying back to the U.S. where we got a car in Maryland and drove across the country to Los Angeles, the senior Scientology org in the country after D.C.

After we arrived at the L.A. org, Ken Salman, the director there, told us we were in luck: since Saint Hill had been closed to Americans, the Church had sent over a team to set up what would become the American Saint Hill Organization (ASHO) and offer all the courses previously only available in Britain.

By the end of the week, the entire family was on staff at ASHO. It was an interesting three years. Especially since ASHO was converted to Sea Org during our time there and most of the staff signed the famous “billion year contract”.

I worked at ASHO, the LA Org, and even a short time with the (now infamous) Guardian’s Office. It was all so very interesting.

In 1971, Dad and Mom (both Class VI auditors and instructors of the Saint Hill Special Briefing Course as well as auditors and Case Supervisors) decided to move to Phoenix and start their own mission.

Getting out of the “billion year contract” was problematic on the outset but was easily accomplished as luck would have it. (Another story… later, maybe.) And the family continued our adventure a little further to the east.

Trying to set up a mission in Phoenix was, well, a bit trying. The city already had one mission (on the east side of town) so we set up on the west side. After a few months, Dad gave it up and joined the staff of the much longer-established Phoenix Mission.

After three years there, they decided to move north to Flagstaff and start a mission there. They had visited Flagstaff on their honeymoon and had vowed to live there one day, and that day had arrived.

It was as slow as starting the Mission in Phoenix had been. The office space we rented was always empty but for the one or two family members whose turn it was to babysit the place.

Six months – and nothing to show for it – that office was closed and the Mission was moved to our house there.

Soon Dad got a psych professor interested enough to invite him to lecture at Northern Arizona University. And things started happening.

Several people started coming by the house regularly for the lectures, some training, or just to sit and talk about metaphysics over a cup of coffee.

One of these was John Dalmas, the science fiction writer, whose recent email had started this recollection.

My Adventures in La-La Land (the Church of Scientology)

I received an email yesterday from John Dalmas, the award-winning science fiction author, asking if I had heard anything about “Independent” Scientology.

I’m sure most people have heard something about the Church of Scientology either pro or con. Either through the antics of Tom Cruise, John Travolta, or Kirstie Ally, a few of their leading celebrity endorsers.

Why Mister Dalmas wrote me about the cult has an unusual – and twisted – history. It is where we met…

My family got involved in the “space age religion” back in 1956, before there was much of a space age. You could say I was raised in the church but that would not quite be correct. Dad was a research chemist (and agnostic) Mom was a Baptist preacher’s kid and took us four boys in tow every Sunday to the local Southern Baptist Church.

Dad’s search had begun at an early age and this drew him to major in psychology at the University of Texas. He very quickly realized most people involved in the program were trying to figure out what was wrong with themselves, just the same as his personal search. After he realized the psychology professor was in the same boat, Dad figured out psychology must not have the answers. He transferred his major to chemistry and looked for other avenues for his personal research.

I remember some the fascinating books he was reading when I was still too young to understand much of it. Proceedings of the American Society of Paranormal Research, Psycho-Cybernetics, and Twenty Cases in Support of Reincarnation were just a few of the ones I remembered. I recall the names Morrison, Snow, and Korzybski on the books. Don’t ask me what the books were about as I was only seven years old when I noticed such things and did not get too involved.

But soon Dad did involve us in the search. We would go ghost hunting, dowsing, UFO watching and that sort of thing. I figured this was a normal upbringing and everyone went through this intense search for the magical, spiritual world that seemed to overlay the physical world we could see.

Somewhere in his search he came across an ad for the Self Realization Fellowship and he read Paramahansa Yogananda’s works. There is a River by Thomas Sugrue caught his eye and he was off to study Edgar Cayce.

Then he came across the book Dianetics: the Modern Science of Mental Health by L. Ron Hubbard. Being an avid science fiction reader, Dad was already familiar with the name of the author. Impressed with the book, Dad was soon trying the processes out on us kids. And very quickly it led into the area of past lives.

He communicated with the Founding Church of Scientology in Washington, D.C., and began taking correspondence courses from them. At that time, the only Scientology Church was the one in Washington.

In 1961, Dad got accepted for a job with Melpar, a chemical company in Fairfax, Virginia, and we sold the house in West Texas and moved to the East Coast so he could pursue his studies at the Church.

By the time we got there, the job had evaporated and we had to live in a condemned farmhouse just outside of Poolesville, Maryland, for several months. [The house is still there, still occupied, and still as condemned today.]

Fortunately, he got a job with NASA which, thanks to President Kennedy, was expanding. We moved into Bethesda, Maryland, and Dad started his courses at the Church in D.C. Soon, Mom was attending them as well.

They went to a conference at the Mayflower Hotel in 1962 where I met Ron Hubbard. I believe it was the last time he was in the country while he was actively running the Church.

By 1964, all four of us boys had joined in the action and were attending courses as well.

Yes, we were all going to “save the world”… but from what, exactly, I was a tad unsure.